One upon a time, after doing a tune up on my wife’s metric cruiser motorcycle, I took it for a test ride to a local convenience store. 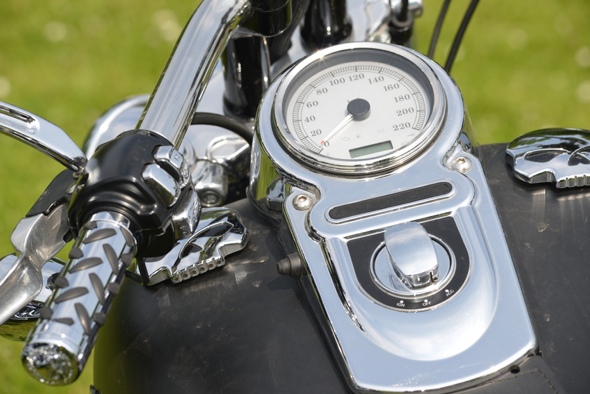 As I was walking out the door with a Coke I’d just bought, a young guy, looking at my leather jacket and helmet, commented, “Hey – that’s a nice Harley! Is it yours?” I chuckled, responded, “Thanks, it’s my wife’s bike,” and went on my way. Nothing strange, right?

Except that “Harley” was a 1999 Kawasaki Vulcan.

Now, don’t get me wrong, anyone in the know would be able to spot the differences immediately, but that Kawi definitely had the look: bobtail fender, fat tank, chrome dash — really a sweet bike. The same thing goes for one of my favorite bikes of all time — the Yamaha Virago and a plethora of other metric cruiser treasures.

Since the late 70’s at least, the japanese — and I say Japanese because that’s what most people think of when they hear the words “metric cruiser” — have been making some good Harley Sportster clones, and in cases like the XS650, Triumph clones. But to call them just clones isn’t fair. From the 79 Yamaha XS650 to the 2008 Honda Shadow and Yamaha Star series, they’re good bikes in their own right, and some have even become collectible.

They may not demand the prices that Harleys do, but therein lies another distinct advantage. For about a third the price, you get a motorcycle that’s every bit as fun, and in many cases, a better choice for the newbie.

Of all the Harley models, the best suited to a beginner would be a Sportster of some kind — but what kind? This is a model that was introduced in 1957, hasn’t changed much since then, and is the most sold and most emulated bike in the world. But any of these models that are still fairly available will cost between about $2500 (for a 70’s Ironhead model) to upwards of $4000 for a newer, Evolution model.

The Ironheads, charming as they are, are famous for needing frequent “attention” while the newer, more reliable Evolution-powered models are far more pricey… so, what to do? Why not take a look at the other end of the spectrum?

When you start to look at the finer details, you’ll see a lot of similarities — classic cruiser looks, and even the (cool-looking) V-Twin motor tucked into the frame on many models. But there are more advantages that aren’t so obvious — for instance, that cool-looking motor has been redesigned and improved to rev higher and run cooler, and with less vibration. All this makes for a more comfortable ride, and a longer lasting bike, with less maintenance necessary, as long as you keep up on the basics. And in the price range from a few hundred (for older models needing a little attention) to about $2500 (for a NICE, newer, 1000cc or bigger ride) it’s hard to not want to take one for a test ride.

I’ve only scratched the surface, but here are some good bikes to start with. For the newbie, check out the late 70’s to early 80’s Yamaha XS650’s, any Yamaha Virago, 80’s Suzuki GS series, any Honda Shadow, and the Kawasaki Vulcan series. These are all cruisers with the looks and the reliability to get the hang of riding on a bike with some definite “cool factor.”

Of course, the newer you go, and the larger the motor, the higher the price goes, but you’ll still be getting a great deal on a very cool bike no matter how you slice it.