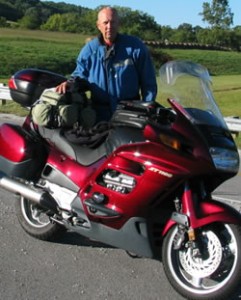 Fred was 6 when he took his first motorcycle ride on his Dad’s 1946 Harley 74. Fred recalls, “I vividly remember holding on to the two gas tank caps.”

Fred continued to ride ‘behind’ his Dad until age 13 — before motorcycle helmets became popular. Fred recalls, “Motorcycle safety was not promoted in those years. My father bought a cork-filled helmet from England in the late 1950s. He loved riding as much as anybody I’ve ever known. He took a couple of ‘spills’ in his life as he called them, but never a serious injury. Looking back, I feel fortunate to have survived those rides.”

When Fred was 14, his Dad opened the first Triumph motorcycle dealership in Memphis Tennessee. Soon after, he took his first solo ride — on a Triumph Tiger Cub. Fred continued to ride until he left for college.

Fred accumulated most of his miles in the Southeastern US. Great riding country by all accounts, especially in the Smokey Mountains. Honda Hoots have been a favored destination of his, in both Asheville and the current location in Knoxville. In addition he served as a tour guide for a Norwegian west coast tour, riding in California and Arizona. Fred recalls,

“We started in Los Angeles and covered California and Arizona — about 1200 miles in eight days. Norwegians are fearless individuals who love life and ride expertly. They all wore full riding gear.” 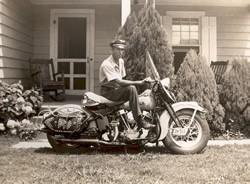 Fred rode to a Honda ST1100 rally in Nevada in 2004. This cross country ride from Alabama to Nevada was 5400 miles round trip. Highlights included fun two-lane roads in Colorado and Utah, US Highway 50 (called the Loneliest Road in America) across Nevada, and riding into Death Valley, where the temperature upon arrival was 124 degrees F.

Motorcycles have been a part of Fred’s life since he was a little boy. While many people are ‘forbidden or discouraged’ to ride, Fred grew up with motorcycles ‘as a way of life’. Still, Fred approaches riding as a balance,

“When the pleasure of riding no longer offsets the risk of injury, it’s time to ride in a box. Everyone should weigh this risk before throwing a leg over. For me, the passion and pleasure of riding has been an unforgettable experience.”

Fred estimates he has ridden over 125k miles on two wheels. Many were commuting to work from 1979 to 1995. Fred’s beginning rider tips appear throughout the site.

Fred retired from NASA in 1995, but is busier now than ever. His passions don’t stop at ‘two wheels’; he plays guitar, loves video production, plays tennis, and is a committed golfer. In fact, he takes tennis and golf *lessons*. Fred is a role model for ‘the retirement years’.

Fred and his wife Louise were married in 1963. “She has always been supportive of my hobby, even though she chooses not to ride” he says. They have two daughters and two grandchildren, and enjoy retirement and traveling together with friends.

Update: Fred replaced his BMW F650GS with another Honda ST1100. Shortly thereafter, he decided that the “pleasure of riding no longer offset the risk of injury” and sorrowfully sold the ST. He practices what he preaches. But, I hear that he is itching to test ride a Can-Am Spyder.

Personal Note. Fred was my motorcycle mentor when I started back riding. His wisdom, passion, and willingness to spend countless hours guiding me, served as a building block for this site. Thanks Fred! David