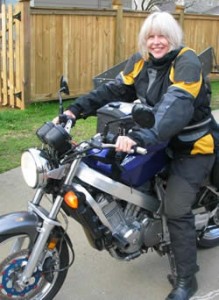 Donn started riding motorcycles when she was already over the hill by AARP standards — just beyond her 50th birthday. For over a year she was content to be a passenger and enjoyed the new form of transportation and entertainment.

“I quickly realized that the speed appealed to me and reminded me of my youth in N.H. I’d always been an addict for wind in my hair — whether on water skis or snow skis. When I was in high school my Uncle tried to gift me his BMW motorcycle and sidecar but my parents put a quick kibosh on that and I never seriously considered owning or riding one again. Life circumstances didn’t present the opportunity, and I didn’t seek it out.”

When Donn partnered up with a motorcycle ‘nut’ five years ago, the opportunity became abundant. “I admitted to him that I would drive a motorcycle if a ‘tiny, tiny’ one could be found.” Of course, one was found within 24 hours.

“Turned out my balance and shifting were good enough to enjoy the local rural roads near my home. I never intended to ride on any extended trips; the interstate was not on my radar.”

In the early days, Donn rode so cautiously that dropping the bike at slow speeds was a repeat problem. “My mentor insisted that speed was my friend. I found that hard to believe.” She was grateful for good gear with heavy-duty armor to protect elbows, knees and head.

“Learning to ride was a humbling process for me. I had to let go of the fantasy that I’d be a quick study, that I was a natural — a wonder woman. I had to go inside and tell my ego to take a backseat. It’s all about fun, anyway, right?”
“I let go of trying to keep up with experienced riders. I practiced starting on hills, over and over. I reminded myself that driving a standard transmission automobile was not my forte so why would I expect instantly to master motorcycling? I thought, Donn, give yourself a break.” 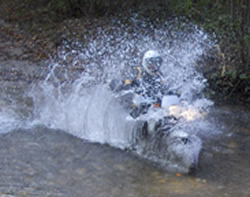 Donn admits there were times she wanted to give up on motorcycling. Instead, she dug deep and found the courage to continue. She took lots of lessons, enrolled in Georgia’s Motorcycle Safety Foundation MSF program, and took private classes with Atlanta Motorcycle Schools. She signed up for dirt bike riding and was 35 years older than other females in the class. Upon reaching an intermediate level of skill, she participated in Larry Grodsky’s Stayin’ Safe Training. Steadily, her riding skills improved.

“Today, I am a proficient and careful rider and have experience with a wide range of bikes. I even rode a Kawasaki ZRX1100 on a Blue Ridge Parkway trip, loaded down with a week’s worth of camping gear. I felt like a pilot coming in for a landing when we brought our bikes to a stop for breaks. All went well.”

Her favorite ride now is a day trip in the mountains on an eye-catching, purple 1989 Honda Hawk 650. She describes the bike as, “smooth as silk; almost naked, compact and powerful. She’s a joy in the twisties and an attraction in the parking lot; a bit vintage like me.”

Donn admits, “Learning to ride has been a maturing, enlightening and rather challenging experience for this middle-aged lady. But it’s been worth it.”

When not riding Donn’s life is full of as much creative activity as she can fit in. She paints on fabric and transforms it into surprising and humorous ‘objects’ such as ice cream sundae hats and chairs that resemble stoves. She is also a freelance writer — writing mostly about art, artists and motorcycles. She’s had several careers, including a decade in the corporate world and another in non-profits. Today her passion is home arranging.

“I’m often a distracted guest when visiting friend’s homes. I can’t keep myself from staring; I’m itching to move things around to improve the appearance or function. I’m slowly growing a business in this field which I call Artfully Done – Home Arranging.”

Perhaps one of these days you’ll see her on HGTV… the motorcycle queen gone artfully domestic.