The best beginner motorcycle – from a motorcycle instructor’s perspective 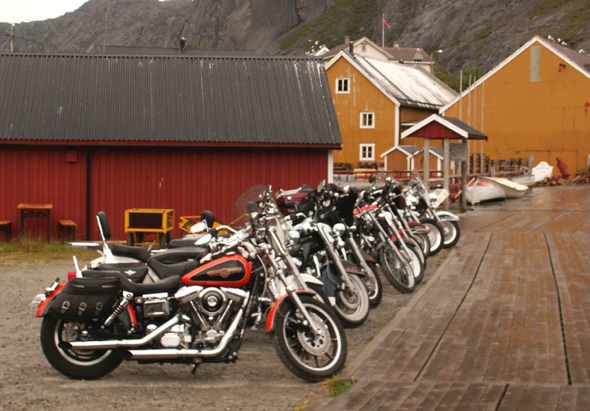 The best beginner motorcycles are used

Your beginner motorcycle shouldn’t be new, or expensive, or heavy, or over-powered, or one that’s deep into some specialty niche. You can make that mistake on your next motorcycle.

If you have several experienced riding friends whom you wish to join, resist the temptation to get something just like (or even better than) what they’re riding. Instead, make your first motorcycle one that perhaps you’ll trade after you’ve logged a few thousand miles (and made a few mistakes). You’ll know far better then what direction your passion (if you still have it) pulls you.

The best beginner motorcycles are small and light

Your learning curve will be much steeper on a motorcycle that’s not intimidating and instead easy to manage. No, it doesn’t have to be a 160cc toy bike of some sort that you’ll be embarrassed to be seen on.

Unless you’re physically much larger than the average bear, a dual-purpose lightweight like a Yamaha XT225 makes an excellent starter bike, or a Kawasaki Sherpa or a Suzuki DR200 or DR250 even; just make sure it’s street-legal.

But I’m not going to ride off-road you protest. Well, maybe not (but don’t rule anything out).

The sit-upright riding position of a motorcycle like this gives you an excellent 360-degree view of traffic. It’s light enough that when you don’t recover from a minor blunder and drop it, you can easily pick it up again (without asking the lady in the SUV at the next pump to give you a hand).

Also, when you do drop it, there’s not $1000 worth of plastic bodywork to replace. Your insurance rates, accordingly, will be much lower, and so will your anxiety level.

The best beginner motorcycles are rugged

The exceptionally nimble handling of a light dual-sport motorcycle is a joy, whether dodging urban traffic or rural potholes (with all that suspension travel, go ahead and center-punch them… uh, potholes, that is!) or trying an unpaved county road. You wouldn’t be the first to discover those little gravel lanes are a delight to explore. You will learn a lot about how a bike handles on a loose surface, which in turn will make you a better street rider.

Can’t convince you to try that flavor?

Get a motorcycle that looks like a traditional motorcycle rather than a jelly mold; one that allows you to actually see the engine and on through it; one that has rear view mirrors which actually function. Motorcycles like this are simpler/cheaper to work on, often have more user-friendly engines, and don’t lure you into going way faster than you’re ready to mange.

Too often the salesman will direct a newbie toward a 600cc race-replica sport bike. “All the power you need if you keep it revved above 8,000 rpm… and a top speed of 140mph+; Dude; what’s not to like?”) Plenty. What he’s not telling you is that under 8,000 rpm the engine is gutless, and you’ll have difficulty at first managing such a spirited thing. A less-highly tuned engine generally pulls better at lower rpm’s, and encourages a more relaxed pace. Sport-bikes tend to have extremely powerful front brakes (easy to over-apply in a panic situation) and a higher center of gravity than their less-focused cousins.

I’m referring to the class of motorcycle which used to be the norm — the ‘standard’ or just plain old unspecialized motorcycle. Standards generally have a comfortable seat height, good all-around capabilities, and a modest price. At one time the four-cylinder iterations on this theme were so common they were referred to somewhat disdainfully as UJM’s (Universal Japanese Motorcycles). Once ubiquitous; now almost a rarity.

The best beginner motorcycles are newer than vintage

Am I suggesting you drop back in time to seek out a 70’s UJM from the plethora of worthy examples from this era? Probably not, unless you enjoy the challenge of doing you own mechanical work (some shops exclude repair of models made before a certain year).

Unless it happened to be stunningly nice, I would advise against accepting a hand-me-down vintage model in most instances. After all, you want to ride; not wrench.

Look instead for something from the 90’s or later. As a general rule, you’ll have greater reliability and less trouble sourcing spare parts when you do need them.

One other class of motorcycles is often chosen by or shoved on the new rider — cruisers — those cool-looking, low slung bad boys of the boulevard. Their low saddle height is initially appealing— easy to straddle and lean the bike from side-to-side, giving the impression that in spite of sometimes considerable weight, the bike can be ‘handled.’ That same low saddle height also reduces your suspension travel and cornering clearance. Used examples often have obnoxiously modified exhaust systems (please don’t go there), lots of superfluous chrome, and even accessories that are downright unsafe (e.g. exaggerated forward controls, highway pegs, slippery chrome twistgrips or even brakeless front wheels).

In addition, their massive grips and levers don’t fit the small-to-average sized hand well. Buckhorn or ape-hanger handlebars place form over function. The seat may be such that it forces you to assume a single position on the bike, with no ability to move around, stand up, use your knees to absorb a bump, or carry a passenger farther than around the block. A bike with these features will not enhance your limited skills.

To re-cap: buy used, buy cheap, buy small. When you’re ready to move on in a few months, you’ll find someone else who wants your trainer, and have a much better idea what you want and how to ride it.

Trust me on this one.

How to overcome FEAR when learning to ride a motorcycle